Cocktails are a major staple in any bartender’s repertoire, but sometimes people don’t quite know what to do with the ingredients left over. Here are some creative options for those hard-to-get rid of liqueurs and spirits!

The “creme de mure” is an ingredient that can be used to make a variety of cocktails. It is a type of liquer made from white wine and brandy, with the addition of sugar, egg whites, and spices. 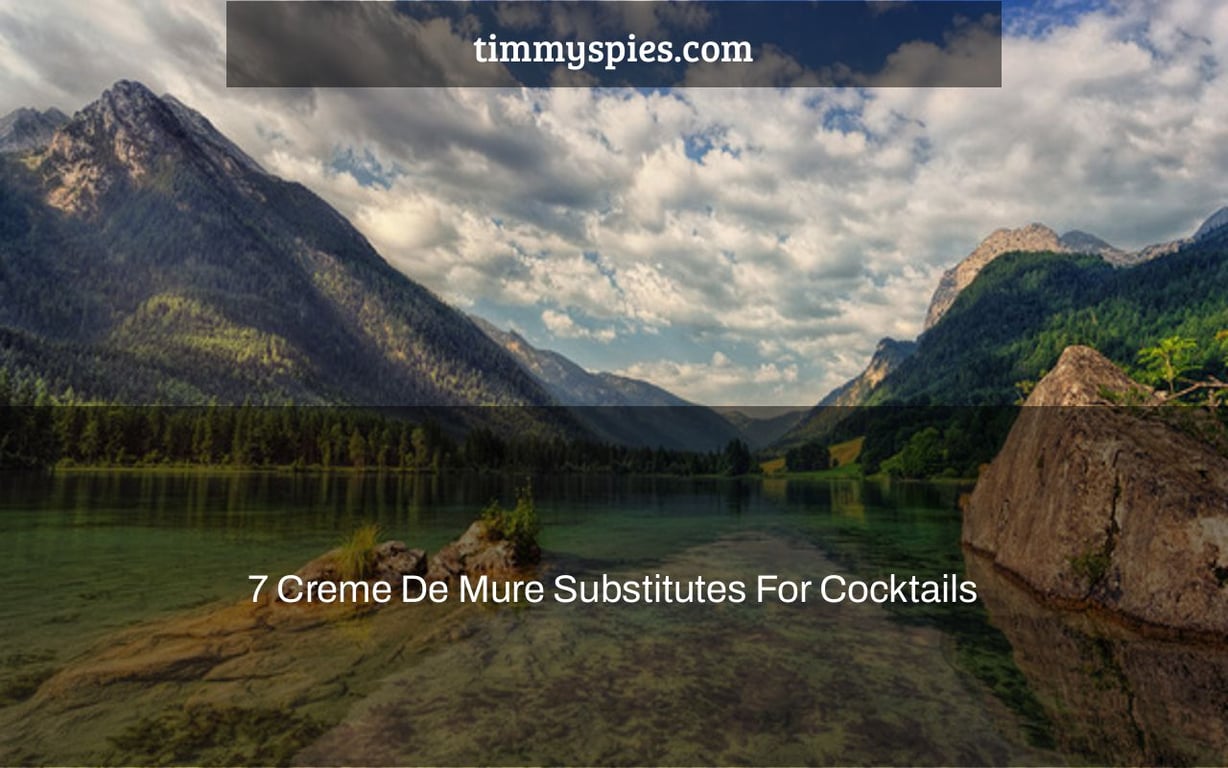 Crème de Mure is a delicious, sweet blackberry liqueur with a faint sour undertone from France. Its luscious, velvety texture makes it ideal for use in cocktails like the Bramble or as a digestif.

Continue reading if you don’t have any in your liquor cabinet or if you’d want to try something else. We’ve compiled a list of Crème de Mure alternatives that may be used in every situation.

Is there anything I can use instead of Crème de Mure?

Try a bottle of Crème de Cassis, Chambord, or Crème de Framboise instead of Crème de Mure. A blackberry syrup or cordial may be used to make a mocktail with no alcohol. Make your own by macerating vodka with red wine, sugar, and blackberries for two days for the greatest taste.

A bottle of Crème de Cassis might be a good substitute, and it’s quite simple to come by. Although this liqueur is derived from black currants rather than blackberries, it has a sweet, berry taste with a little tang.

Choose a brand like Drillaud, Hiram Walker, Massenez, or Lejay that has a lot of berry taste. They’re all great for cocktails like the Kir Royale or the Black Demure.

Chambord is a high-end raspberry liqueur that is highly regarded by bartenders worldwide. In drinks like the Wibble, Apple and Blackberry Spritz, or Berry Flip, it may be used as a replacement. In a Manhattan or Margarita, it’s also fantastic.

Black and red raspberries of the highest quality are infused with XO cognac, Madagascan vanilla, blackberries, and herbs. This provides the liqueur a distinct flavor profile that is more complex than Crème de Mure.

Chambord, on the other hand, has a thinner texture, is sweeter, and lacks the same strong blackberry taste. To make up for it, consider adding more and cutting out on sweets like Agave syrup.

If you like the taste of raspberry, a bottle of Creme de Framboise might be a good option. Although the taste will not be the same, the drink will be brighter and somewhat tangier.

Any cocktail that asks for Crème de Mure, like as a Godfrey, Pontberry Martini, or Black and White Daiquiri, may be made with Creme de Framboise. This liqueur is especially useful in sweet dishes that need a berry taste boost.

Non-drinkers and children may substitute blackberry syrup or cordial for Crème de Mure. It has a strong blackberry flavor, but it’s also quite sweet. To account for the sweetness, cut the quantity in half.

Are you seeking for a suitable substitute for your next pudding, cake, or pie recipe? In a dish, mix a cup of fresh or thawed blackberries with a spoonful of sugar. It’s ideal for adding berry taste to meals once pureed.

Your next Uncle Vanya or Blackberry Martini won’t be made with blackberry puree. The texture will be unsatisfactory.

6. Brandy made from blackberries

If you’re in a pinch, blackberry brandy will work in beverages, but it’s not ideal. Reduce the quantity used in cocktails such the La Rosa Margarita, the London Scramble, and the Moraldo.

Before presenting it to others, you should do a tasting test to ensure that the flavor is correct. If you make a Bramble, the brandy will quickly dominate the gin, making the cocktail less refreshing.

7. Crème de Mure Made at Home

It takes a few days to make blackberry liqueur at home, but it’s the most genuine method to achieve the taste of store-bought Crème de Mure. This dish is easy to create, and if the berries aren’t out of season, you’ll save money.

Notes about the recipe

The ideal berries to use are those that are in season and are both flavorful and inexpensive. A delightful liqueur may also be made using frozen berries. Shiraz, merlot, or Nebbiolo are good red wines to use in Crème de Mure. If you don’t have any vodka, gin may be substituted. The flavored gins should be avoided. If your home becomes too hot and there’s nowhere cold to put the liquor to macerate, put it in the freezer.

Questions that are often asked

What are some nice blackberry liqueur brands?

On the market, there are a variety of excellent blackberry liqueurs. Marie Brizard, Bols, Drillaurd, and Giffard are all well-known brands.

What is the best way to consume Crème de Mure?

Crème de Mure is a sweet, strong drink that works well as a digestif or aperitif. It’s most famous for being the star of the Bramble cocktail. The Martini, Allegheny, Dramble, Apple Black Royal, and The Ridgwell are just a few of the beverages you may make with it.

What’s the best way to create a Bramble cocktail?

50ml gin, 1 tbsp sugar syrup, and 30ml lemon juice in a cocktail shaker with ice. Shake vigorously, then strain into a tumbler over ice and sprinkle with Crème de Mure, allowing the liqueur to seep into the glass. A garnish of blackberries and a lemon slice adds a lovely finishing touch to this cocktail.

More alternatives: How may Orgeat be substituted in beverages? What are the best Amer Picon substitutes?

To sum it up

It’s not difficult to replace Crème de Mure. Use an alternative like as Crème de Cassis or Chambord, both of which may be found in liquor shops. For non-drinkers and cooks, blackberry syrup is the finest option.

Make Crème de Mure at home using simple ingredients like vodka, sugar, red wine, and blackberries if you have a few days to spare. It’s a straightforward, risk-free method for getting true blackberry liqueur at a lower cost.

The “bramble cocktail recipe” is a drink that has been around for quite some time. It was originally made with gin, but now can be substituted with almost anything.

Is Creme de Mure the same as Chambord?

A: Creme de Mure is not the same as Chambord.

What can I use instead of Crème de Cassis?

A: The alternative to Crème de Cassis is, perhaps surprisingly, Kirsch.